The innovative Four Peaks for Teachers charitable campaign, conceived in 2011 by Four Peaks co-founder Jim Scussel, was created to help reduce the financial burden on teachers in the Southwest who often purchase supplies for their classrooms and are never reimbursed. By earmarking a portion of sales of its flagship Scottish-Style Amber Ale, Kilt Lifter, and direct, tax-deductible donations, Four Peaks purchases supplies and creates pre-packaged kits of essential items for classrooms. These kits include paper reams, pencils, pens and dry erase markers, post-it notes, local retailer coupons and more. Kits are distributed annually every summer prior to the new school year.

“We all felt we needed to do more to support teachers. So, for our 11th year running the campaign, we expanded the program to recognize 11 exemplary teachers,” Scussel said. “Our grant competition was open to teachers nationwide, even in states that don’t carry our beer yet.”
We were overwhelmed by the responses we received,” he said. “It validated our belief that teachers need more support. The number of nominations we received and the stories that were shared had a profound impact on us. It was very difficult to choose just 11 teachers for the grants.”

Over a period of several months, Four Peaks received 1,255 submissions from across the country written by students, parents and colleagues nominating their favorite deserving teacher to be considered for a $1,000 grant.

Congratulations to the 2021 Four Peaks for Teachers $1,000 Grant Winners: 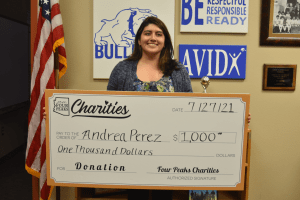 “Ms. Perez inspires hope through her daily actions and ability to connect with others. She takes time to build relationships with families to get to know each student’s individual situation to best support them. She listens and responds in meaningful and helpful ways as soon as she learns of a family or student that is struggling.” 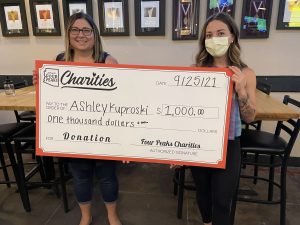 “Ms. Kuproski is an amazing teacher. She is always smiling and showing love to her students. She is passionate and caring and teaches to the students as individuals, not just as a whole. She also runs an after-school STEM program. Every student who has her is blessed.” 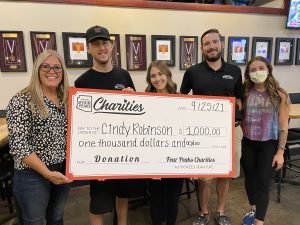 “Cindy Robinson is a teacher who goes out of her way to make sure her students have the supplies they need to learn. She uses her own money to purchase supplies, and this is expensive for a teacher.” 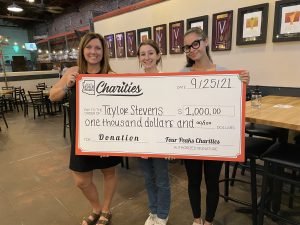 “Taylor works for ASU Prep and desperately needs the funds to create and implement a direct reading intervention program to support students from low-income families. Taylor lives for her special needs students and finds creative ways to meet their needs and challenges as many may slip through the system without an education that is geared for their special needs. I believe Taylor will implement a program that will gain support and recognition from local, regional and state ED agencies.” 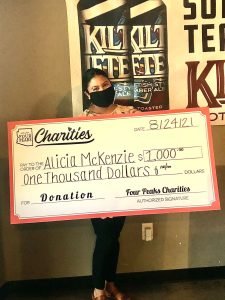 “There’s not a better candidate than Mrs. McKenzie! Not only is she such a good teacher, but the way she goes above and beyond making sure her students have what they need, in the classroom and at home, is so incredible. When Mission Manor Elementary did not have enough staff for a student council, Alicia made sure she made that happen because to her, it’s important that the kids have something to look forward to and stay educated, especially in a low-income neighborhood. Outside of school, she has even set up a small backpack drive that was so successful, they were donated to the school and kept in the front office for kids that ever needed them. Even with the pandemic, Mrs. McKenzie was dropping off supplies and snacks to family’s doorsteps anytime they were in need.” 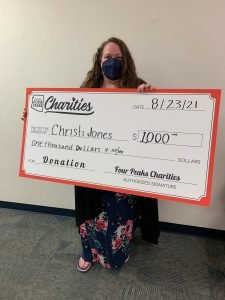 “I’ve known Christi Jones for years and am inspired by her dedication and commitment to her students. She consistently puts in both additional hours and her own money to ensure that her students have a well-rounded curriculum. She goes above and beyond by frequently organizing contests, prizes, and opportunities for others to donate to her students. Through the pandemic, she probably spent more time than ever making sure the online curriculum for her students was engaging, and she truly cares about each of her students.” 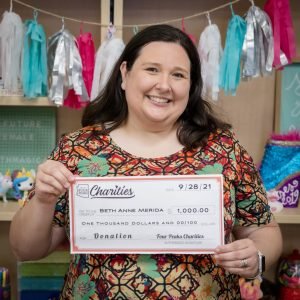 “Ms. Merida is a life-changing teacher. She always encourages and supports her students. I could not imagine my junior year without her as my math teacher. She loves her job and students, and her students love her back. There is no one else who deserves this award except for Ms. Merida. She is one of my biggest role models. In her class, I learned that I wanted to major in math just like she did. She helped me realize that I belong with math, and I will never know how to thank her enough. She is a true inspiration, and the best teacher I have ever learned from.” 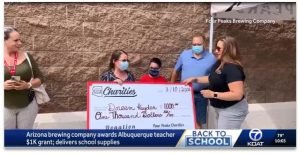 “Mrs. Hayden is the most hardworking and dedicated teacher. The time and effort that she puts into each one of her students is extraordinary. I am immensely grateful to have had her as my 4th grade teacher several years ago. Not only did she inspire me to achieve my goals, but she incorporated many useful activities/programs that helped me grow as a student as well as a person. One of the many things I had learned from her class is the importance of education. Mrs. Hayden always found a way to make learning fun. She continues to inspire kids by kindling their desire to learn so that they can achieve great things. I truly hope Mrs. Hayden gets nominated; I cannot think of a more deserving and hardworking teacher. The fact that she is trying to win school supplies for her students says a lot about her selflessness and her passion for teaching.” 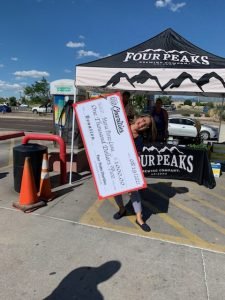 “Mrs. Pérez-Luna gives 110% every single day. What makes her truly a spectacular teacher is how she makes a connection with every student she meets. Not only does she teach ninth grade English, she also is able to help students that have special education needs. She always makes sure she has meaningful curriculum that also engages student who aren’t into English or school for that matter. She really makes everyone feel welcome and comfortable in her classroom. I nominate Maria Perez-Luna because of her passion and love for teaching.” 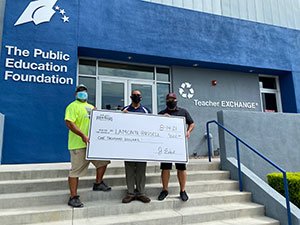 “As the years go by, Mr. Russell continues to go above and beyond for his students. He did not view a year of remote learning as a roadblock, but as an opportunity to think outside of the box. Last summer, prior to the start of the school year, he created an extra-curricular, virtual master’s class series named “Conversations With…”. Drawing from several decades of performing, he scheduled one-on-one virtual meetings between his students and well-known singers, performers, musicians and educators. These individuals discussed their careers and provided insights to the students, but more importantly, the students were given the opportunity to ask questions live. This kind of opportunity would be immeasurable any other time, and it was even more so during a pandemic where students often felt isolated and out-of-touch. What will Mr. Russell think of next?” 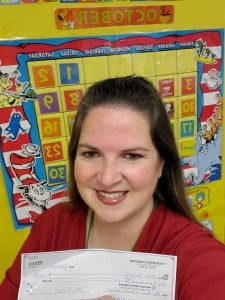 “Mrs. Andrew has a great imagination and a lot of ideas to help these littles love to learn. This will be her first year of teaching kindergarten, but she has been preparing and bouncing ideas off everyone for years! She could use this grant to help turn her classroom into a world of imagination!”